In the Athenian Acropolis, the ruins of this remarkable temple of Erechtheion can be seen, which was built between 421 BC and 406 BC. It was built for Erichthonius (the first king of Athens), Poseidon and Athena.

The temple has a unique Ionian design. It features columns in the shape of female figures: the famous 6 Caryatids that represent the 6 daughters of King Erichthonius.

As with many of the constructions of the Acropolis, Pericles gave clear instructions to his architect Menesicles, to use the magnificent white marble from Mount Pentelicus. White marble was the preferred material in the period of 400 BC, given that it created an optical effect of absolute beauty and purity.

However, as an interesting aside, the temple of Erichthonius used polychrome decoration, which is why our creative team at Coordonné decided to imagine the temple covered with our wall covering, Archs Turquoise, which imitates the sky.

Our wall covering, featuring polychrome marble, parallel geometric shapes and round arches, emphasises the temple’s sequence of columns, as well as the mathematical perfection and slenderness of this Greek building.

An incredible visual privilege which invites us to continue our journey through Europe. Let your imagination soar! #CoordonneMonuments 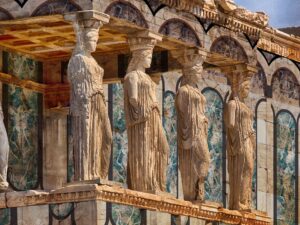 The Venezia velvet collection: the antidote to stains