In both the 1964 and 2018 versions of Mary Poppins, the characters and film sets allowed us to venture into the most magical of worlds, where everything was possible.

Let’s remember how our hearts skipped a beat watching Julie Andrews playing the role of a magical nanny who transformed everything into something positive in the incredible city of London.

This cinematic hit won so many awards, among them, best film, best actress, best visual effects, best original song and best soundtrack, catapulting Walt Disney to the top of his game.

We want to create exactly the same visual and emotional effect for you! Here you can see a simple concrete wall, reinterpreted with our crazy, romantic Folies design from the Maximalism collection.

Whether you leave the curtains or tie them back, what is certain is that the staircase will transport you to a world where flying with an umbrella is possible!

Our goal is clear: to transform homes and allow your walls to tell stories.

Creating a positive vibe is what gets us excited here at Coordonné. We always aim to include wallpaper as an architectural element. 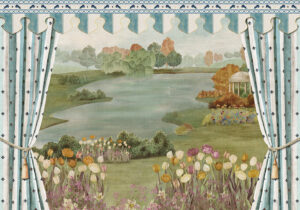 Stamping on wood plates or woodcut