The evolution of wallpaper

It is wonderful to think how much wallpaper has evolved since its origins. We must not forget that it was actually in China, in 200 BC, when the decorative wall arts first began, by sticking rice paper on the walls.

From rice paper it passed to papyrus and parchment, and later, thanks to the wise knowledge of the Arabs, the use of recycled textile bases, among other materials, became common. Thanks to the silk route, the commercialisation of wallpaper began, and from the Middle Ages, hand-painted paper began to be used in Europe, which later became mass-produced thanks to block printing with wood. The 16th century European aristocracy then raised this decorative material to a highly desirable and valuable status.

Today we can find a great variety of printing techniques, the traditional type with rollers or cylinders that print the paper continuously by colours and in stages. There is digital printing that allows infinite colour combinations, as well as an endless number of bases or raw materials that also vary in their formats, sizes, textures and uses.

We have the mural format which aims to represent a more artistic scene, allowing the walls to tell infinite stories. Then there is a paper format whose designs are repeated in varying dimensions that we call the “repeat”. This is what helps us to calculate how many rolls we will need to cover a particular wall.

The widths of the panels or rolls vary between roughly 50 to 110 cm, as well as the lengths of the rolls. These can range from 5 meters up to any required cut length if we are dealing with technical wallpapers for use in hotels or hospitals, for example.

The base materials do not only vary in aesthetics (smooth and matte, textured and shiny, metallic, etc.), but also according to their use or where they will be hung. We can find natural fibres which are not fire resistant (the famous and elegant Raffias) and which are very difficult to wash, or we can find non-woven or non-woven with vinyl wall coverings with fire retardant certifications and a very high washability and resistance.

Innovation, as in other industries, is infinite. Coordonné is always here to share new and exciting news with you!

By the 12th century, wallpaper had already arrived in Europe. In 1500, the fashion for wallpaper grew in France and England. At this time, its production using blocks was already beginning, through repeating a single pattern. The oldest known European wallpaper comes from Cambridge (Christ College), from 1509, and is printed on the back of the proclamation of King Henry VII.

In the 16th century, wallpaper arrived into people’s homes. The very first wallpaper came from England and was made with block printing on a black background. The most common motifs were heraldic, damask or brocade. 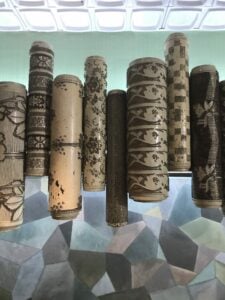 This period, spanning from 1837 to 1901, was a time of transformation in the decorative arts, which was vibrant and represented by not just one style, but by many. Historical revivals, an anti-industrial return to nature, futurism and oriental exoticism coexisted in the public imagination.

Advances were made with Louis Robert in France in 1798, and later with Fourdrinier, who in 1807 patented a machine that could make wallpaper of any length. In 1830, this great invention was already being used by other manufacturers.

Another great advance took place in 1839 with the patenting of a machine capable of printing four colours (oil inks) and manufacturing 400 rolls per day. Anilines were discovered in 1839, which increased the variety of colours available, while the price of manufacturing also became cheaper. In Victorian times arsenic was used to manufacture it, which led to health problems. Starting in 1870, many manufacturers began to make their papers free from arsenic.

At this time the designs were inspired by textiles, architecture, landscapes and florals. Artists like William Morris brought their artistic inspiration to wallpaper.

The introduction of borders in rooms also helped wallpaper to evolve. In 1870, fully washable colour wallpapers were created that were widely used in bathrooms and kitchens.

It was in the 20th century when wallpaper was established as one more element of home decoration, not just suitable for the aristocracy.

Wallpaper, as we can see, has enjoyed a long and varied journey. Its use went into decline, but its popularity returned in the 50s, 60s and 70s when artists like David Hicks helped bring it back into fashion.

After this period of splendour, it went into decline again in the 80s. It took 30 years for it to return to fashion, and to regain its rightful place on the walls of our homes.

In the next instalment we will arrive at the 21st century and differentiate between vinyl, vinyl coated and other types. We will learn how to hang then and also how to calculate the quantities you need to buy.

Trapped by nature, surrounded by fôret